Got up at 6am, had nice breakfast with warm cereals and coffee. Hit the trail around 7am. Planned 5 liters water for the 18 miles hike for today. 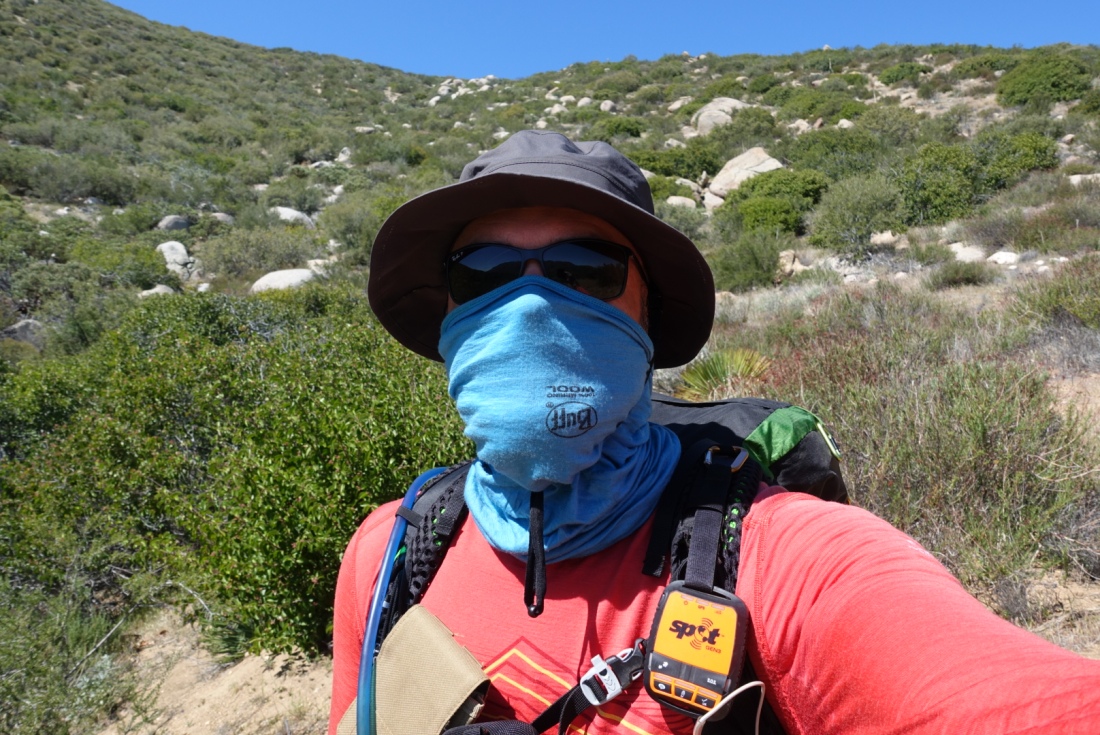 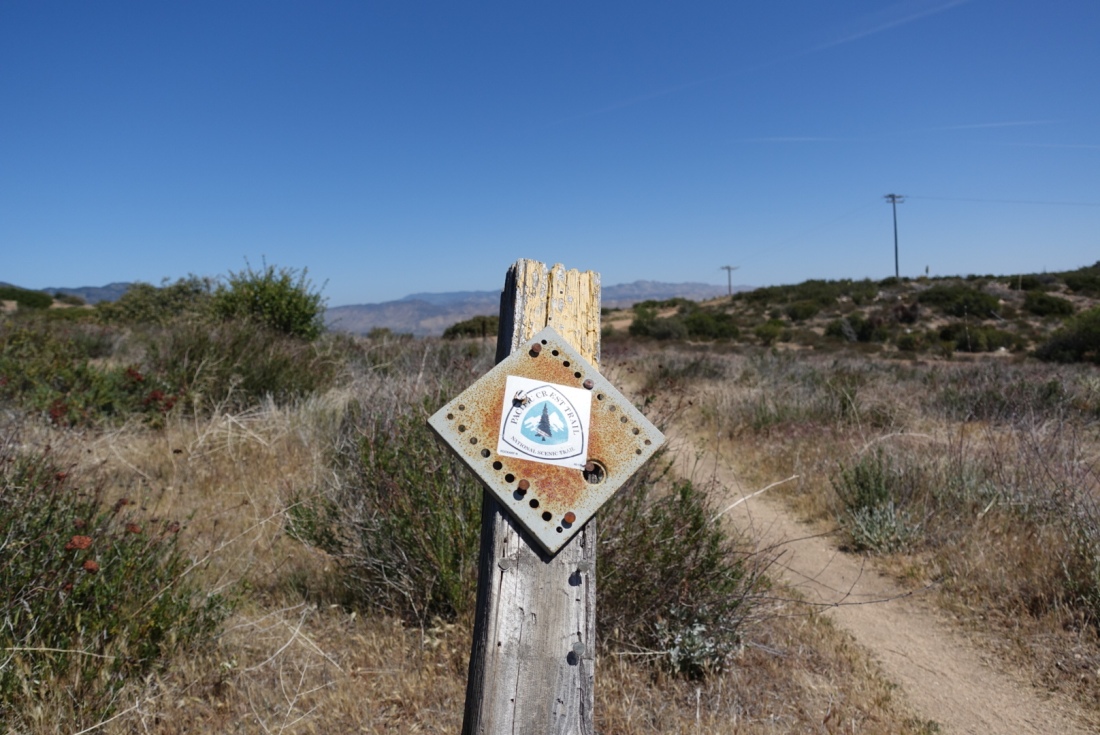 Made it to Scissors Crossing around 4pm, quickly got a ride to Julian with Rotem and Colin.

Enjoyed the evening and night at Carmen’s. 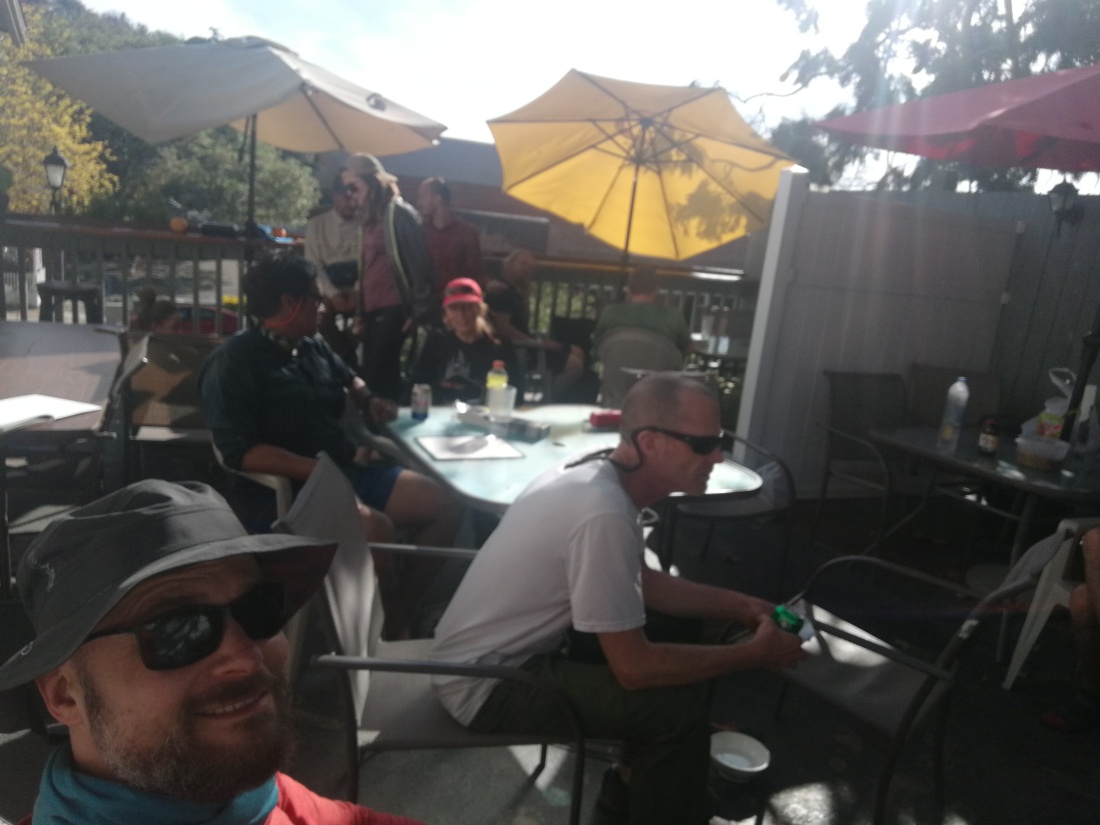 This will be a good day. We all got up around 6am except Rotem… Guess that was the big wine bottle? 😁

The trail was even better than I hoped… There was water after 7 miles and the air was much cooler. Trees, shade, mostly downhill. 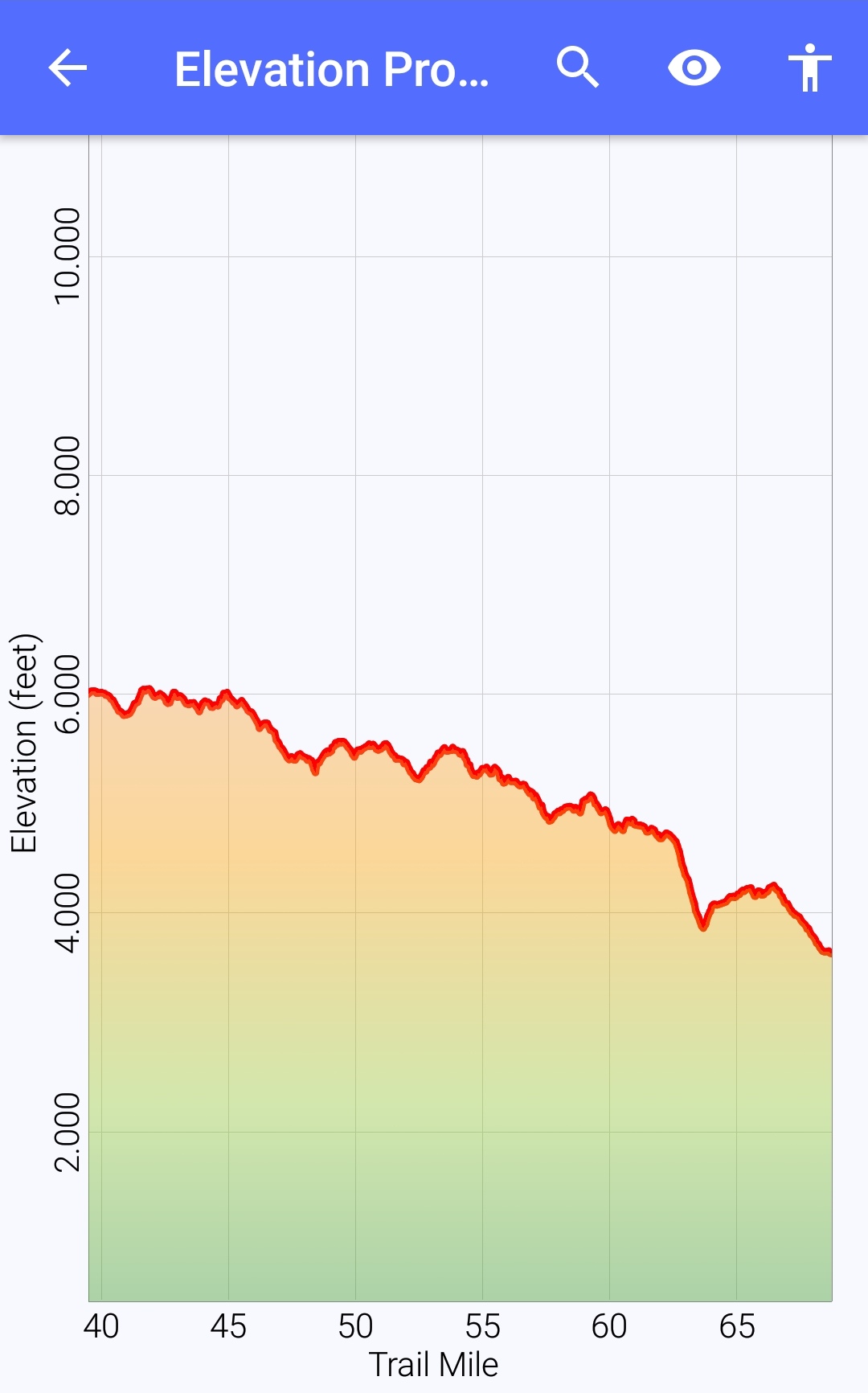 I was pretty fast. I had started with 4 liters but saw after 7 miles that I only needed 1.5. So I adjusted for the next 4 miles piece.

Arrived here at the water 11 miles in for my siesta around 12pm. 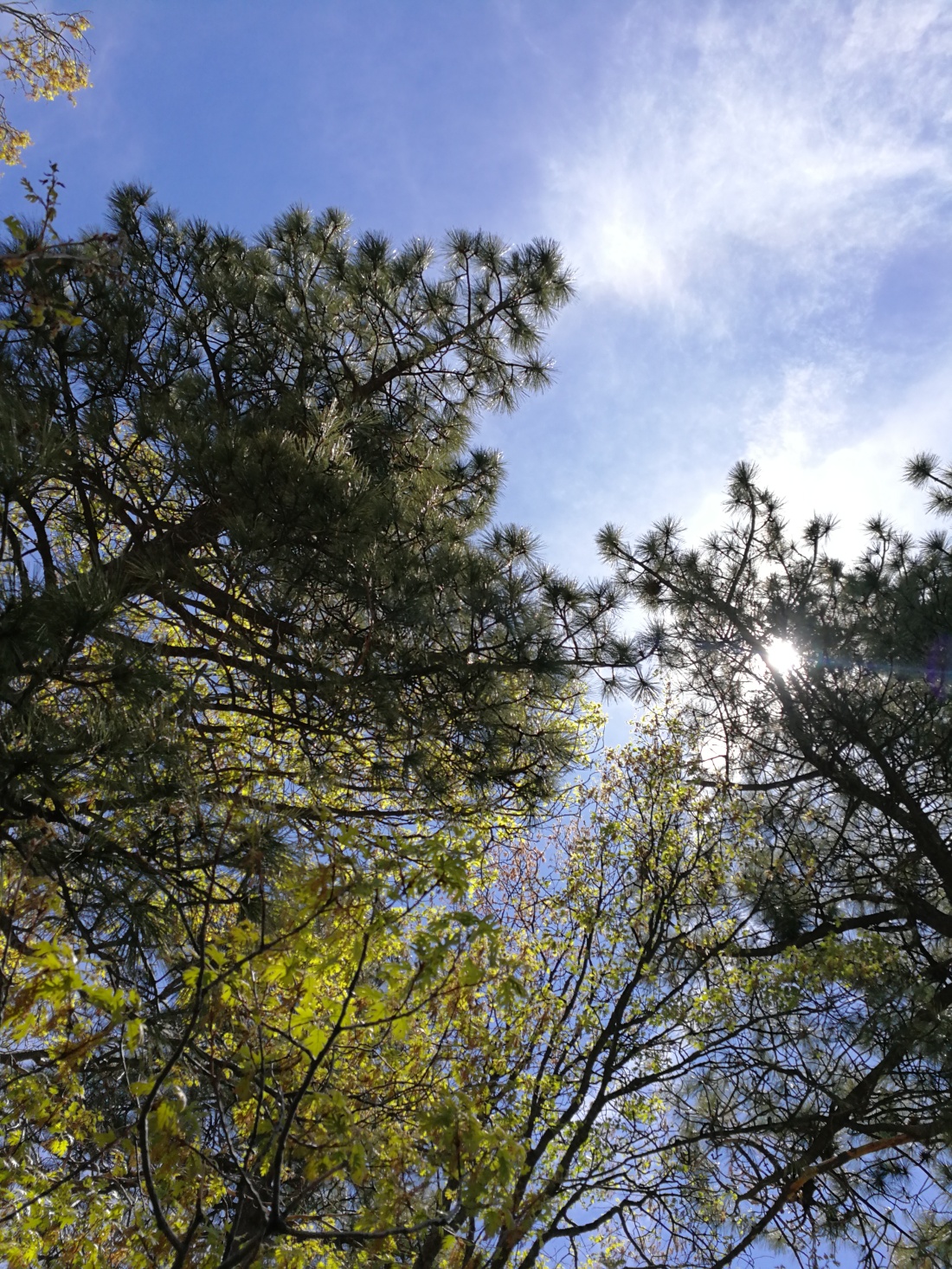 Many other hikers arrived. We made the plan to camp at mile 59 where a water tank was waiting – it would be an 18 miles day. We left the shades around 3pm and took on the last 7 miles. 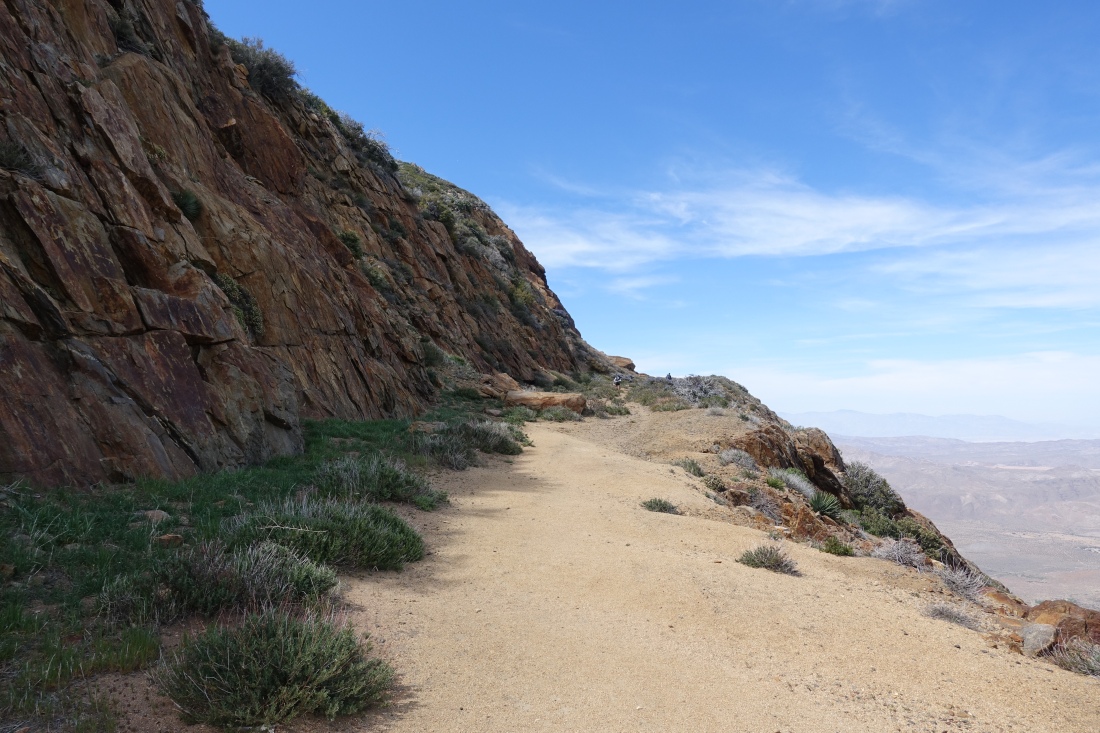 We made it to camp around 6.30pm. Short before, I had my first trail magic experience! 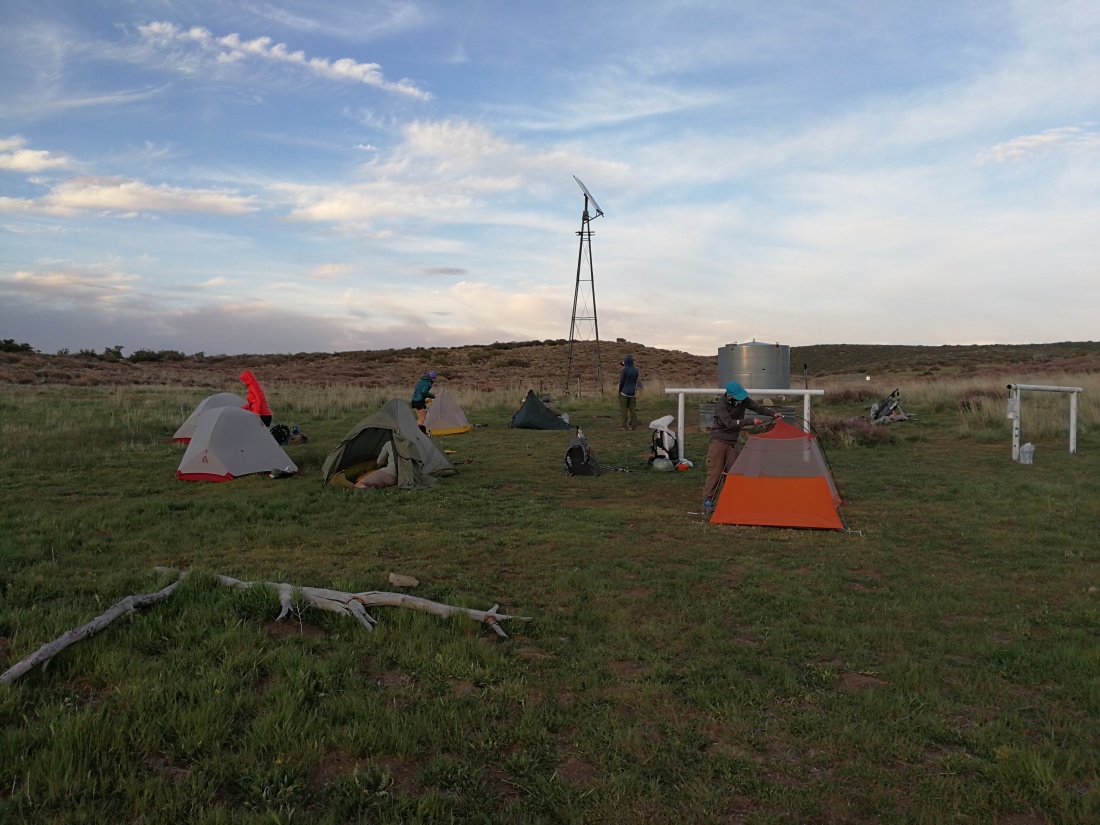 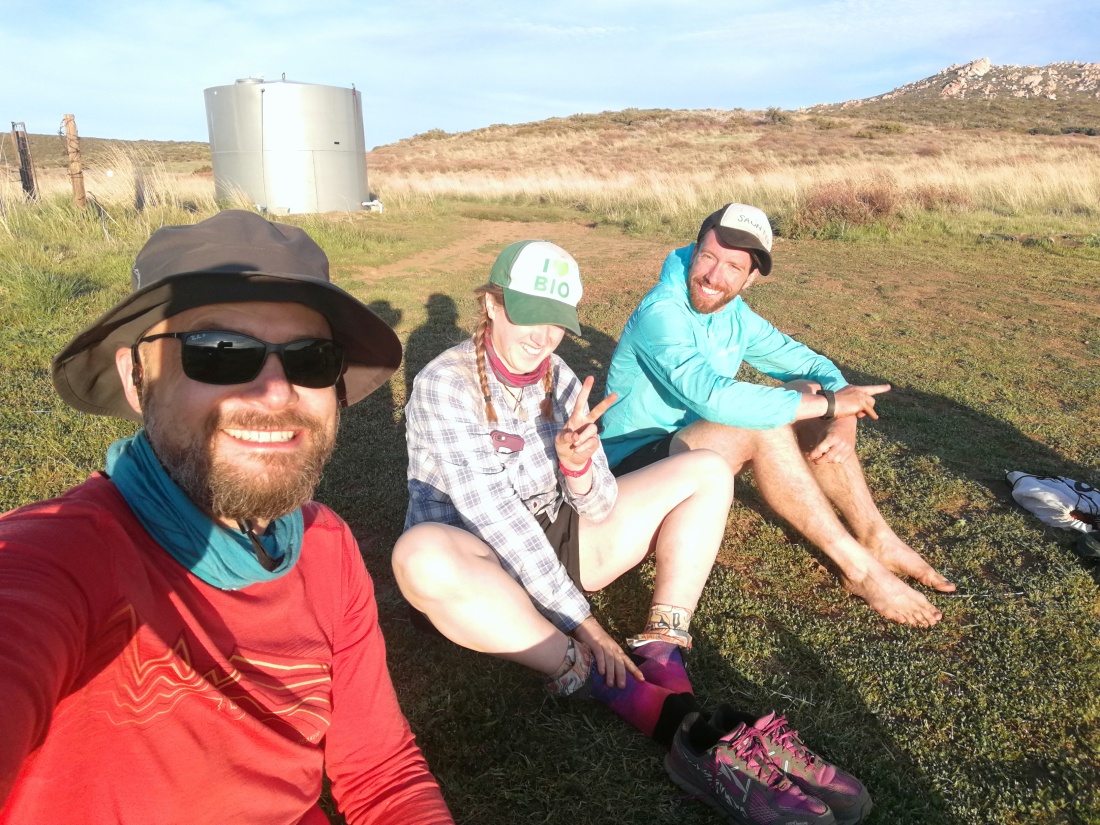 A nice morning. The sounds of birds and frogs woke me up short before 6am, so I was on trail before 7am. Just before passing the bee hive, I met another hiker and we hurried by together. No problems this time, guess they were really sleepy as I was hoping. 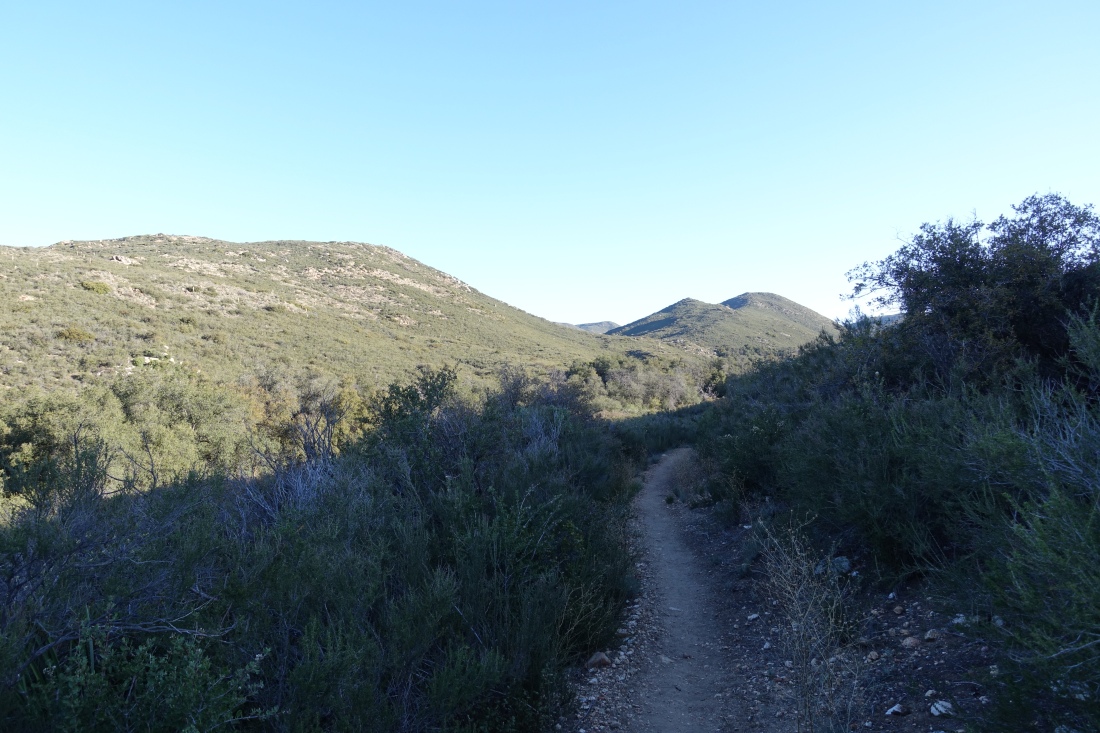 I did not feel as refreshed as the previous day… The heat got me early. I took breaks at 5 miles, 7 miles and around 10 miles just before Mount Laguna, the destination for today.

Had a nice chat with Rotem in a long lunch break at mile 10, later on also Paulina joined. 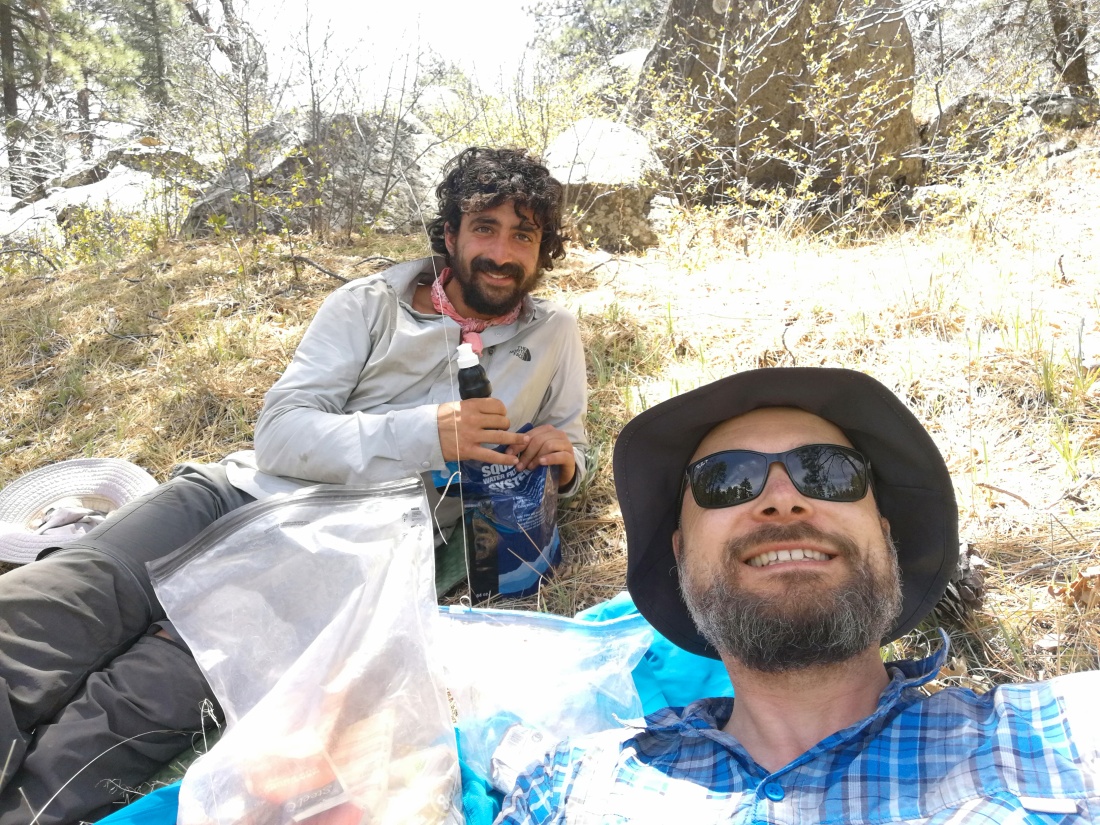 We hiked together the last mile to Mount Laguna. We did some shopping at the general store, I picked up my package. I had ordered enough food for 4-5 days to take me to Warner Springs. With the food I had left, I am now carrying way too much food.

So at least for dinner I could eat my own food – the only restaurant in town is closed on Monday.

We had a nice dinner in a group with other PCT hikers. Later Rotem was playing Ukulele and singing at the fire – PCT life at its best.

A great day with nice company. Looking forward to tomorrow. It should be even or downhill for the next 30 miles.

Taking a nap around mile 40, short before my first resupply stop at Mount Laguna.

Everything hurts a littlez but nothing is really painful. It looked yesterday like I might get a blister, but it disappeared…

Enough water, a chocolate Cliff bar in my hand, sunshine…

Will probably take a short day today and stay in Mount Laguna at a campground.

I slept pretty well on my first night. I got up around 6am, quickly packed my tent and had a small breakfast with coffee and a Cliff bar. Due to only two liters water remaining for the climb to Lake Morena with the next water source in 5 miles, I skipped the planned warm breakfast. The climb was not too much – about 1000 feet – and I was happy to enjoy the relatively cool morning. Only on top of the ridge I had sun on my face again. I was in good spirits, feeling that my feet, legs and shoulders had funny recovered during the sleep.

Coming into Lake Morena campground, I meet two other German PCT hikers. I filled my water and even made a (failing) attempt to get a shower. Around 1030am I walked to a nearby small store and restaurant where I found Johanna from Switzerland already buying supplies. We both enjoyed a warm meal and discussed the next water sources.

Boulder Campground was just another 6 miles away. So I took off with just 4 liters of water. 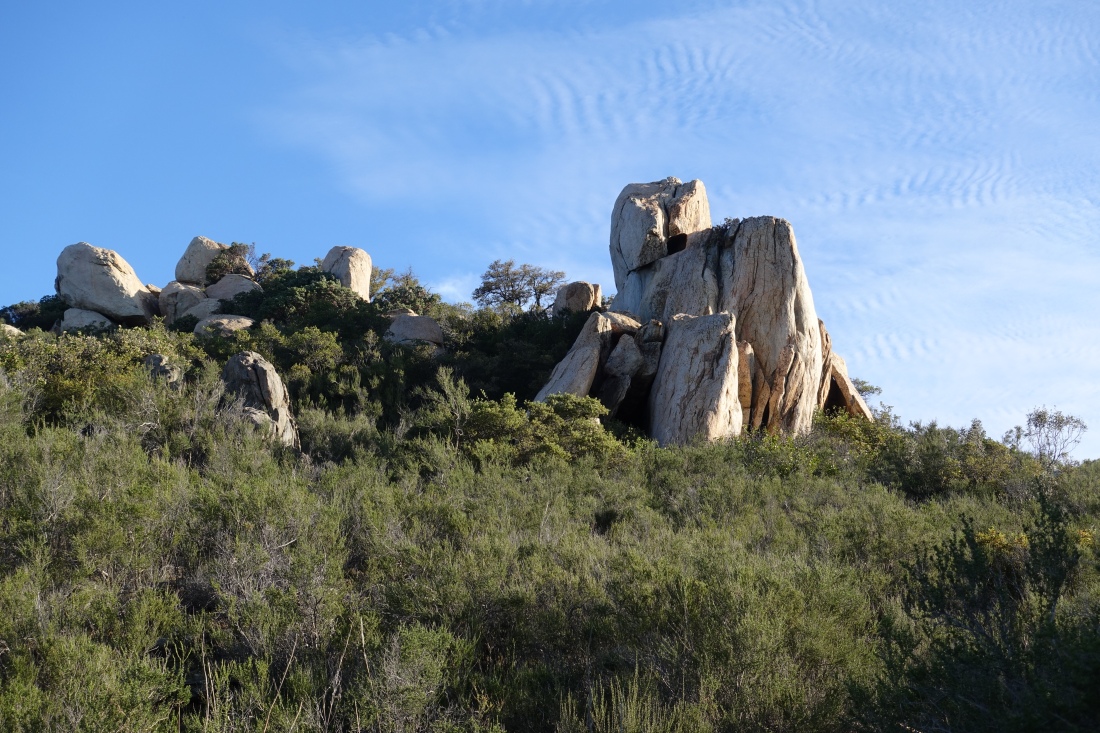 The Boulder Campground is really small with no shops, but I was happy to refill water there. By now I had decided to roughly head for 15 miles again today and according to the water report, there was a tent site at mile 30 with water. I discussed this plan with a few other hikers, but I ended up in that beautiful spot pitching my tent alone. So the second night in trail will be the first night camping alone. I will sleep without rain fly again to enjoy the view with stars at night time. The frogs from the creek are providing a nice background noise to fall asleep.

Tomorrow I plan to start early again. In just half a mile, another agressive bee hive was reported. I hope they will still be sleepy when I sneak by before 7am.