I came a long way. 2650 miles and more than 150 days later, I have completed my journey on the Pacific Crest Trail on Sept 24th!

I am happy, relieved, proud, excited… and haven’t fully understood yet that the hiking has really come to an end. 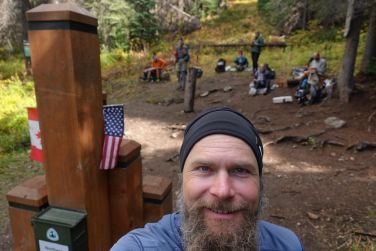 Hiking the PCT meant freedom and new encounters every day. I got used to beautiful sunsets, landscapes that take your breath away. It was a pleasure to meet all these amazing people on trail – especially Cactass, Tinkle and Spirit Kick.

Thanks to my family, friends and former colleagues for their support and encouragement during the last months.

The last two weeks in Washington were the biggest challenge during the hike. We got soaked in heavy rain several times (where also my phone died), had snow several times. We were at a point to turn back and leave the trail due to the weather and limited food. But the weather changed and the sun dried our gear and motivated us to push on.

“The only impossible journey is the one you never begin”

PS: I will be updating the blog for the missing weeks in Washington with amazing photos during the next days…

The alarm went off as usual at 6.15am. As we had feared, the tentsite had had a lot of humidity from the vegetation surrounding us over night. So in the inside of my tent was wet from condensation that had also settled on my sleeping bag. And it was very cold – a wet cold.

Slow start, we were still chewing our breakfast at dawn when Spirit Kick walked by, not recognizing us in the red down jackets.

Started walking with sleeping underwear and my hoodie as well as the down jacket and gloves on… But got warmer maybe 30min later. Caught up with Spirit Kick again a bit later and caught up on the latest. We hiked for a good part together chatting. 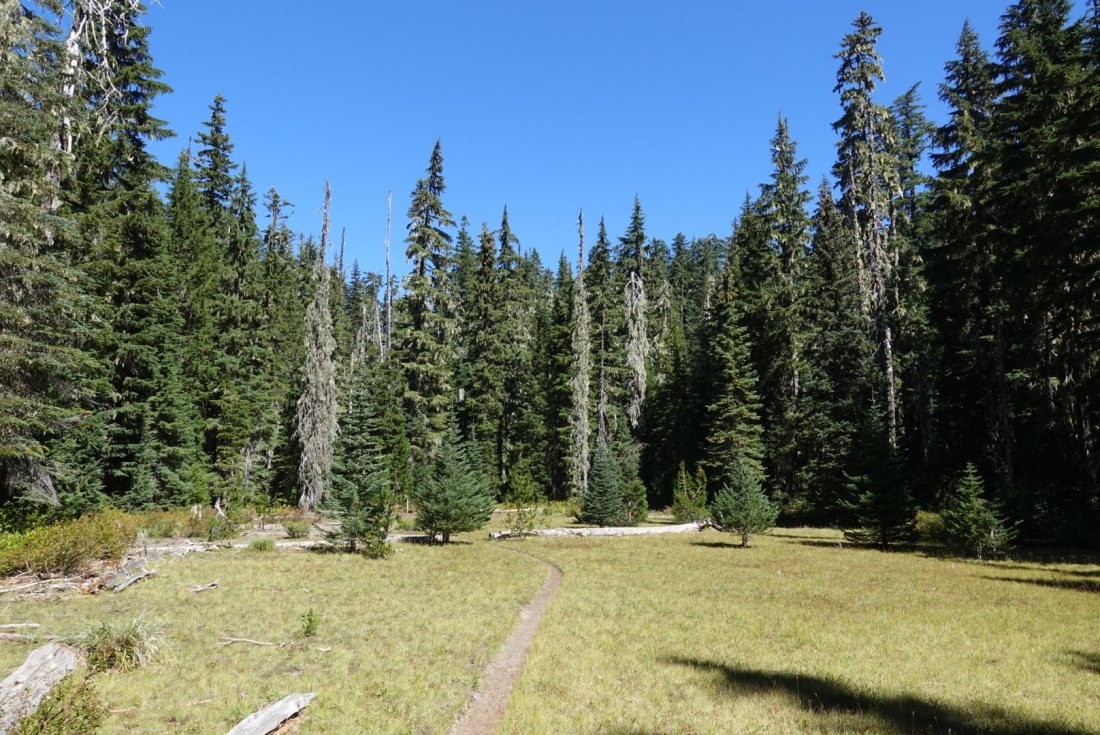 Refilled some water and discussed the hitching options into Trout Lake. One road just 10 miles from our tentsite with very little traffic and a second road another 5 miles and 1500 feet altitude later with a bit more traffic and a potential shuttle into town.

We gave it 15min at the first road that we hit around 12pm – but with no cars at all, we moved on.

At 2pm at the crossing, Tinkle was quickly lucky and stopped a ride. There was only space for two – Spirit Kick took the ride together with another hiker. Shortly later Tinkle got us the next car. Bill – a friendly older guy who has been living around Trout Lake for 50 years. Bill is a dog lover. As we passed through the neighborhood, he stopped from time to time. Dogs would run up recognizing his car – and he threw some goodies out for them.

Trout Lake is a small community. We went through our town duties quickly. Met up with Spirit Kick again, had some burgers, moved on to the grocery store that also held our resupply packages and new shoes for me. We had trouble finding the packages… we looked again and again. I found again a package addressed to another hiker Florian Eckert. I never met him, but had seen packages for him along the trail again and again.

When we looked one more time, we got our packages! 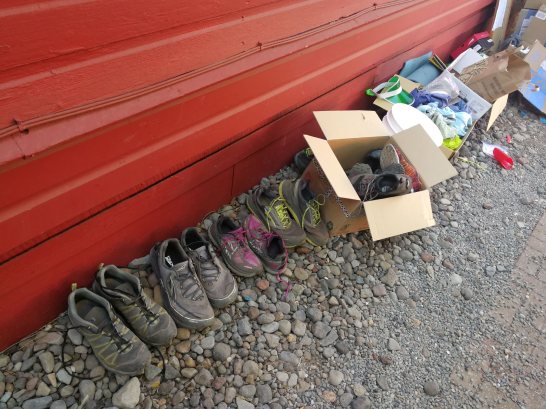 While there was free camping in the yard of the grocery store, we opted for the village campground – it had decent showers! After pitching our three tents, we went one by one to have the shower. Tinkle attracted some trail magic – coming back from the shower, we were greeted by water melon, hot dogs and more snacks.

Cleaned up and well fed, falling asleep at 9pm.

Got a little earlier start at 7.30am. The vertical profile looked a bit easier for today. With weather still decent, we made it to the 2200 miles marker around noon. 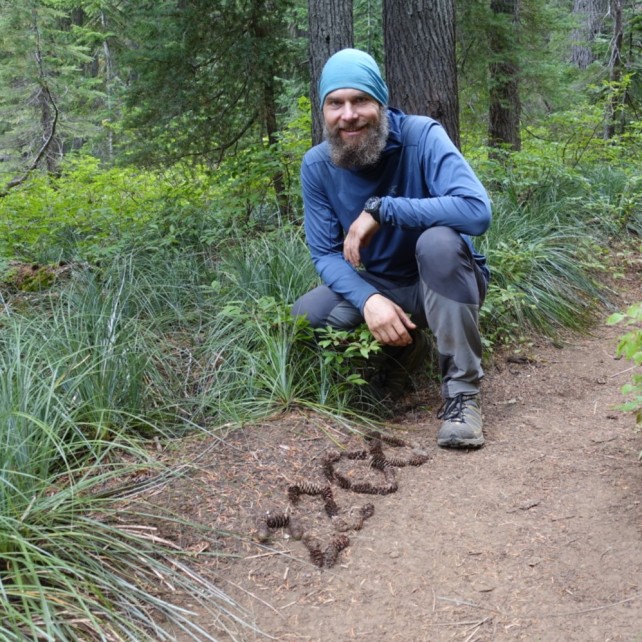 We took our lunch break at Blue Lake. The clouds turned darker and the wind was cold – it was not easy to find a protected spot to lay down for a while. The lake however was popular with day hikers. It was really icy, we cut our break short and moved on. 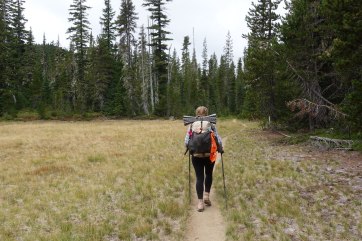 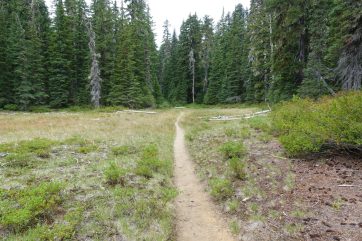 Water at Bear Lake some miles later. And we had so much blueberries today. 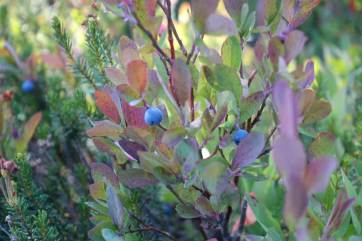 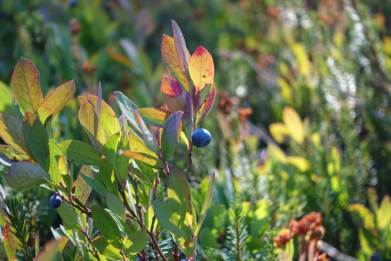 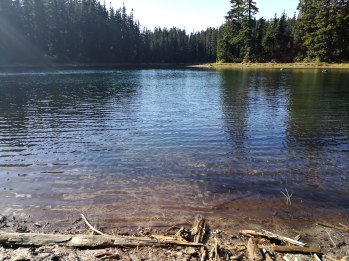 With many day hikers around, we ran into two mothers with 4 kids around 5pm. With the kids getting tired, they were getting desperate to find a campsite. We pointed them into the requested direction and moved on.

We had amazing views of Mt Adams just before pitching the tents around 7.15pm. 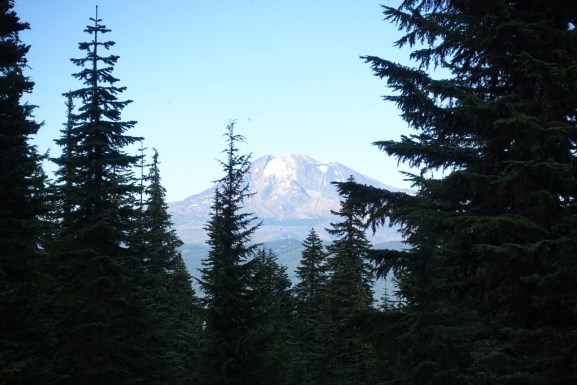 Had two dinners – hungry from the cold wind… and I need the energy.

Started hiking around 7am. The trail continued through the same scenery like yesterday. The trail was constantly climbing, but slowly. I was quite happy with that. I had been worried a bit the last weeks hiking in the flat section of Oregon about possible tough climbs in Washington like in the Sierras. We had planned for Washington and the resupply an average of 22 miles per day – less than what we did in Oregon, but more than in the Sierras. Of course this was only day 2 in Washington – but it would turn out easier from the climbs than expected. 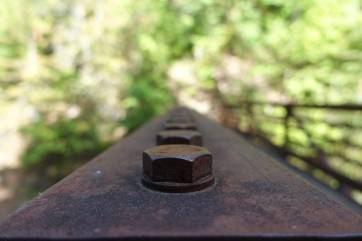 About 24 miles. Pitched the tents around 8pm. Dinner and sleeping time. A good day.

We had another big breakfast in town where we met up with Crumbs. Then we brought our resupply packages for Washington to the Post Office. We were sending 4 packages – to our planned stops at Trout Lake, White Pass, Snoqualmie and Skykomish. Due to the fire closure around Stehekin, we had not decided yet to send a package for a last resupply there or not.

Then came a big moment – crossing the Columbia river from Oregon to Washington via the Bridge of the Gods. The bridge is famously featured in the movie “Wild”: 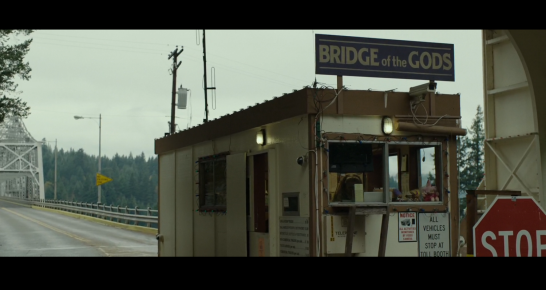 Crossing the narrow bridge by foot, we got a nice greeting by the lady in the toll both – and a mix of friendly greetings and confused looks from drivers passing by… 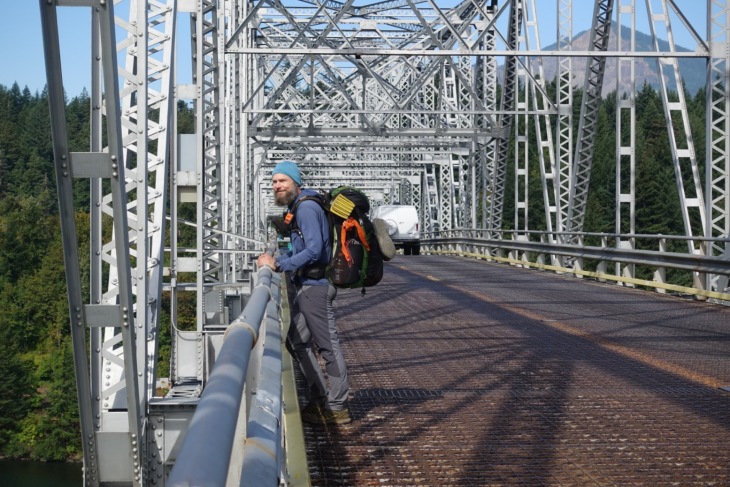 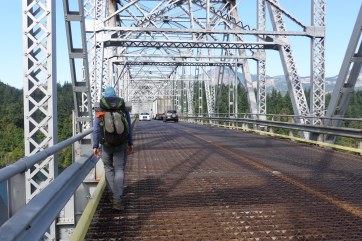 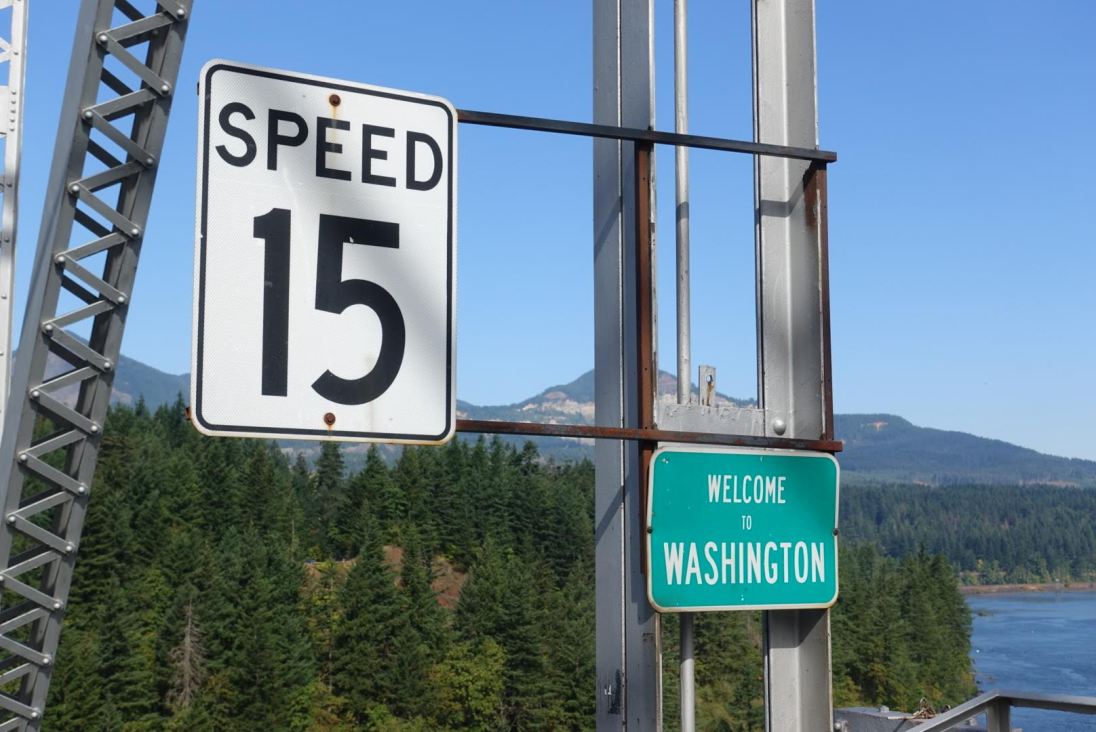 A beer before noon to celebrate the last section of our PCT journey – the state of Washington. The trail started soon after the crossing to lead us back to the woods. 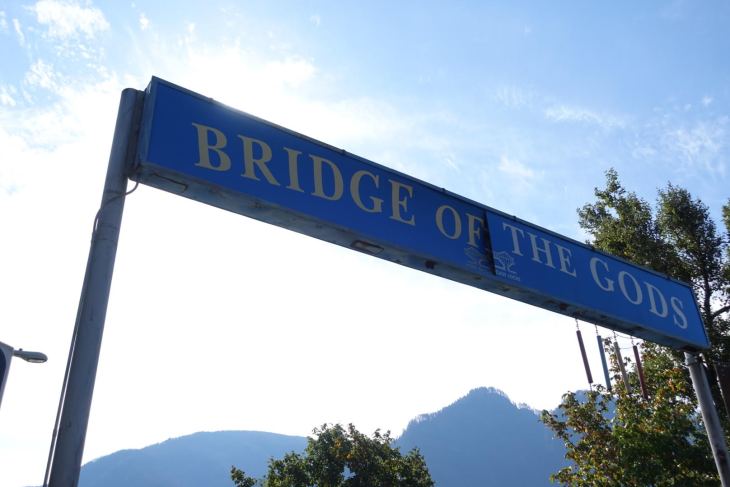 The vegetation looked differently. Lush green vegetation, big ferns… it always felt like rain forest. The expected climb turned out to be not too bad. 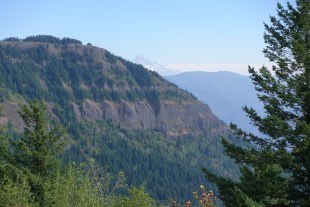 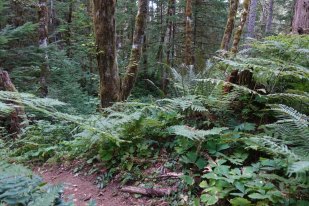 We found a campsite with water at 7.30pm around mile 2166 – 20 miles despite our late start and the celebration beer. Good start into Washington!

Food. Resupply shopping. Getting my gear ready for Washington. Shipping resupply boxes. And rest. So I will let the photos speak for themselves.

Special thanks to Helen and Al – the couple from Oregon had spent time last year at Tinkle’s family’s bed and breakfast in Switzerland. They got friendly with the family and offered help for Tinkle’s upcoming PCT hike. They were so kind and drove us to Portland for shopping and invited us for lunch. Thank you! That made our preparations for Washington so much easier – and I really enjoyed meeting you! 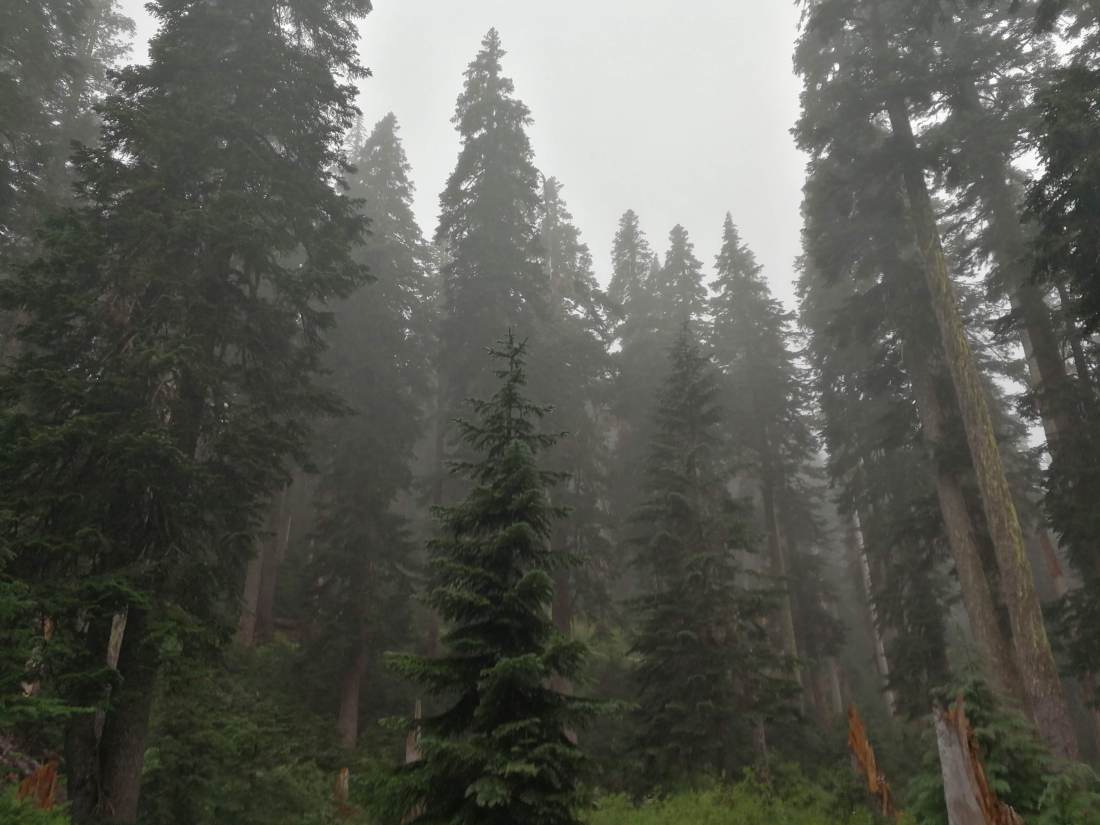 It was still light rain when I woke up with first light. It was comfortably enough in the tent, but the thought of getting out into the rain, having to hike 28 miles through the rain to make it to Cascade Locks was not the most attractive one…

So we stayed in our tents during breakfast, hoping for the rain to stop. At least it changed to just a drizzle when we finally got out and packed our tents. While my tent had held up well during the night, I realized that I had pitched it in a small ditch last night. Water had collected right under the tent and pushed through the floor into the tent. I did not have too much water inside, but the tent itself was soaked with water and mud.

Still I had to pack it and get everything into my pack. We started hiking with rain gear – in my case just my thin wind/rain jacket and short pants and the pack protected by a rain cover.

With 28 miles to go and cold wind and continuing rain, we reduced the breaks to a minimum. It took maybe 30 minutes to get my feet inside the Salomon Ultra X shoes soaking wet. 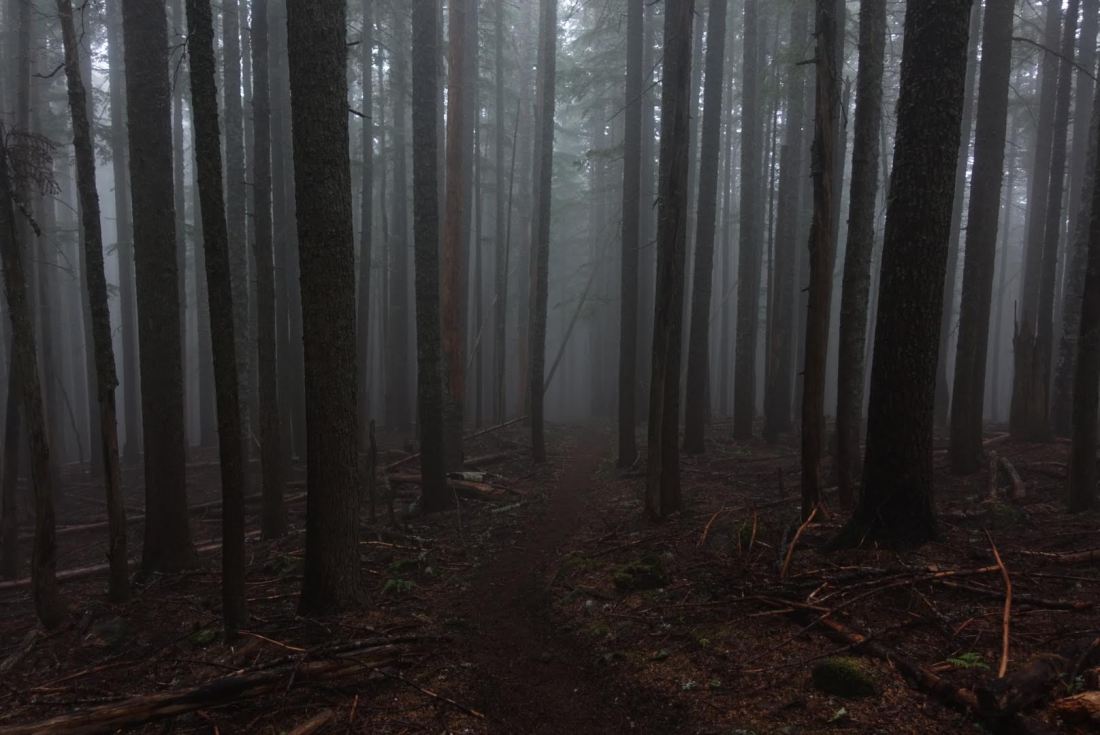 The clouded sky stayed dark the whole day – walking through the dark forest foggy from low hanging clouds was really special. A new experience after 4 months good weather on trail. But thruhiking can not just mean good weather hiking I guess…

Despite being wet and cold in the beginning, I enjoyed the experience.

There were so many blueberry bushes along the trail. Eating the ripe blueberries washed by the rain was delicious… The only way I want to eat blueberries from now on… 😁

The rain finally stopped and with hiking fast, I was able to get warm even with just the thin rain gear I had. The thought of getting my better weather gear from a box shipped by my good friend Steven to Cascade Locks was helping.

Today would be the last hiking day in Oregon. The PCT famous Bridge of Gods in Cascade Locks leads into Washington, the last chapter of my PCT journey. It was an amazing last hiking day that Oregon provided. Short before Cascade Locks, I saw a bear cub, a snake and a group of deer – as if the animals were wishing a farewell…

We made it around 7.45pm into Cascade Locks. Two rest days (zero miles days) are planned. Good to dry the gear and get some rest before heading into Washington.

#blackouttuesday #stopracism #love #alllivesmatter
April 21st 2018 was when I started my PCT hike... What a great experience. I am glad I had the courage at that time - never would I have thought how the following 5 months and 2650 miles would change me. How the encounters I had would change my life. Looking back with happiness and pride. Of all the paths in life, make sure a few of them are dirt. - John Muir #pct2018 #thruhike #trailversary #anniversary #pacificcresttrail #pctlove #desertsection
Solitude Everything you ever wanted is on the other side of fear. #lenzburg #switzerland #sunset #isolation
Schloss Lenzburg #lenzburg #castle #sunshine #clouds #sky
Coming home
Celebrating a quiet new year's eve at Riederalp 🇨🇭🏔️😍
The world is big