Got up at 6am, condensation in the tent. Lazy breakfast, still cold without the sun. Started hiking 730am. After a couple miles back on the PCT.

Climbing Glen Pass, made it to the top at 9.30am. Watched two hikers cross the next snow field, one starts sliding down. Luckily only a short distance until he finds hold again. 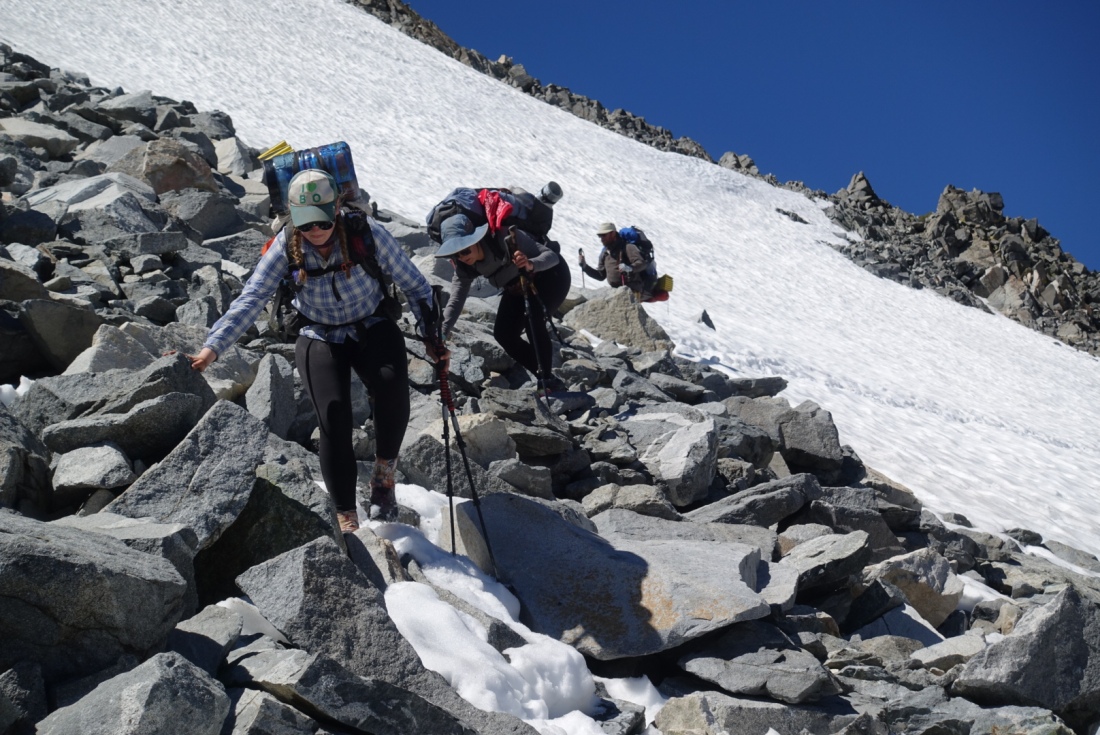 Crossing the snowfield was not so difficult after all. Followed the rocks instead of footprints in the snow a lot of times.

Beautiful view on the Rae Lakes. Lunch break here at 11.45am.

After the one pass comes the next in the Sierras… After descending from Glen, we started the approach on Pinchot pass. We soon passed the 800 miles marker…

After starting the long ascend towards Pinchot, we walked along a valley with a river rushing down a wide flat rock bed. We ran into three other hiker Irish Toni, Smalls and Michael when we came to suspicious scene around 5.30pm.

Two backpacks lay open close to the river, with gear laying around them. A water bottle and hiking poles lay right next to the rushing river on the flat slippery surface.

We saw a hiker below the waterfall – he had obviously been washed down by the rushing water – miraculously he didn’t drown but could find a refuge on some rocks right next to the waterfall.

Another hiker belonging to the second pack showed up shortly after. She had witnessed her hiking buddy falling and had tried unseccessfully to find safe crossing over the river to get closer to him. We all decided to stay and help the rescue efforts as we could. The hiker was already in touch with SAR (search and rescue) with her Garmin InReach and was confirming position and describing the situation. I tried to keep her at a safe distance from the river and throw over some supplies to stuck hiker – emergency bivy, some food and sleeping bag to keep warm as well as his headlamp. We communicated by handwritten notes, wrapped around a stone in a plastic bag due to the loud waterfall.

About 30 minutes later, the rescue helicopter appeared and surveyed the scene with a few fly overs. He announced his return via loudspeaker and disappeared again.

When the helicopter appeared again, he started lowering a rescuers right next to the hiker in distress. Amazing to watch the accuracy of the rescue team, considering the roaring waterfall right next to them. 10 minutes later, the hiker was lifted out of the dangerous situation.

Full video of the rescue will be available soon.

We were all still shaken when we started hiking again around 7pm to make it closer to Pinchot pass. Glad that the hiker had obviously been saved without major injuries, it also made clear how one misstep can lead to disaster.
We came to another water crossing but due to setting darkness, we decided to camp and cross in the morning. Pitched tents and ate in darkness.