This would be the day of the golden triangle – the major attractions Pingvellir, Geysir and Gulfoss that are located close enough to Reykjavik for a day trip. With that, I was also anticipating more crowds of tourists than in the relatively quiet North.

Heading towards Pingvellir, I was planning to take road 435. I had read some nice reviews about Pingvellir where approaching was recommended via this scenic route. As it turned out, that advice was only good for summer time:

When I later came to the Pingvellir area, I avoided the main parking spot but took an earlier turn South along the lake.

Took a lunch break on a small dirt road in this beautiful area.

Continuing on towards Geysir, my next stop was at the Oxararfoss waterfall and a connected small canyon. The access into the canyon was a bit steep. With so many people crawling down, it was actually funny to watch how many were scared of slipping or falling and decided to glide down instead sitting on their pants. 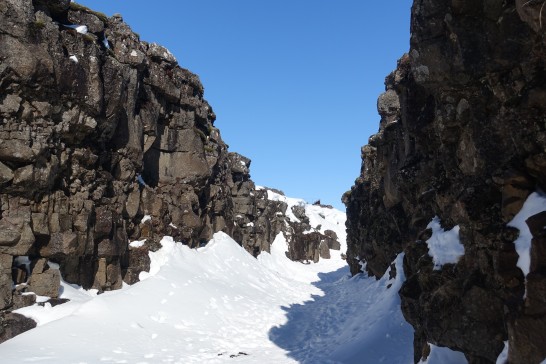 Following the tourist crowds, next stop was the Geysir area.

After this geothermal area, I was heading on towards Gulfoss, again with a full parking lot. I really wonder if this is low season, how is this area looking like in peak season?

And it was time for another hotpot for the night. Checking the useful hotpoticeland.com website, I drove a bit South towards Fludir. The camping ground there was closed, but would make a good parking for the night anyway. Drove on some dirt roads towards the close hotpot in Hruni called Hrunalaug. Due to the proximity to the golden triangle, this hotpot was packed full with visitors. Some people from Iceland, but also from China and the US. It got a bit tight in there, but I still stayed for an hour or so. Surely not the same and these lone hotpots in the North I had enjoyed so much – but a hotpot after all.

At 9.30pm at the closed campground where I stayed for the night.

April 21st 2018 was when I started my PCT hike... What a great experience. I am glad I had the courage at that time - never would I have thought how the following 5 months and 2650 miles would change me. How the encounters I had would change my life. Looking back with happiness and pride. Of all the paths in life, make sure a few of them are dirt. - John Muir #pct2018 #thruhike #trailversary #anniversary #pacificcresttrail #pctlove #desertsection
Solitude Everything you ever wanted is on the other side of fear. #lenzburg #switzerland #sunset #isolation
Schloss Lenzburg #lenzburg #castle #sunshine #clouds #sky
Coming home
Celebrating a quiet new year's eve at Riederalp 🇨🇭🏔️😍
First hike in Switzerland since I moved here. ❤️🇨🇭 Mt Säntis. #säntis #switzerland #hiking #mountains #firstsnow
%d bloggers like this: